Why A Black American Model?

When I first envisioned the TC CHARTON collection, I had only one simple mission in mind — I wanted to offer beautiful and chic eyewear products to Asian Americans. More precisely, all Asian people who reside in this great country. As one of them, I want to do something for my fellow Asian Americans who work so hard to be an integral part of this nation, and call this land our own, even if we are only 12 % of its entire population. Sometimes, we must work harder to prove ourselves. Sometimes, we must face conflicting sets of values that are different than our ancestors’ cultural heritages. As much as we feel just as American as everyone else, we look different than a Caucasian person. Being a “minority” is challenging at times, but feeling bad about how we look shouldn’t be one of them. We are simply built differently.

TC CHARTON is here to offer you glasses that are designed with your specific facial structure in mind. So when you wear them, you don’t have to wish you had Caucasian features just so the glasses won’t slide down or sit on your cheeks. You no longer need to secretly wish for plastic surgery every time you feel frustrated while shopping for glasses!

Of course, diversity is a beautiful thing. It is what makes this nation so great, and it is the inevitable future. As the world gets smaller, people from different parts of the world mingle, interracial marriages are becoming more and more common, and we are witnessing a shift from what used to be “normal” and the so called “standard”. We are creating the new norms, and the world is a better place because of it. Esthetically TC CHARTON is true to the American sense of style, but technically they are shaped and built to NOT fit the same as conventional eyewear.

I am not here to exclude, I am here to include ALL of us who used to feel excluded and forgotten by the eyewear industry.

The old “standard fit” is still good for the majority, but it is not for me, nor you. Every season, I try to offer different designs that can serve a specific need: faces with extremely low bridges, faces that are very wide, faces with very high arches, faces with very small PDs…For 2014, we are including some sophisticated styles for petite men and women, and more styles for people with low but wider bridges.

Only recently I started to notice that we have a following of Black Americans and Blasians (Black American and Asian mix) and also Latinos. We even have some Caucasian fans! While I am extremely happy about the fact that my products are serving a much wider demography that I hadn’t thought of before, it also makes me wonder whether I was wrong all along to call this collection “Asian Fit”.

I didn’t mean to exclude. I want my products to be worn by anybody who needs them. Everybody deserves glasses that fit and are beautiful at the same time.

After months of pondering over this and even taking online polls through our Facebook page, I am finally at peace with myself. I know my collection is the antithesis of exclusion, and my fans know it too. While I must not forget that most of my inspiration comes from Asian faces, and therefore TC CHARTON is foremost an Asian Fit collection, I am thrilled and happy to know that our products are also serving some of my fellow Americans of other ethnicities.

This photo shoot is my response to all of our fans that are NOT Asians — I present to you, Eldridge Henderson, my incredibly handsome Black model, who flew in from San Francisco to be part of our shoot.

Among hundreds of models’ portfolios, Eldridge caught my eye because I saw a picture of him wearing a pair of Ray Ban frames and while his wardrobe and pose were impeccable, I noticed that the frames were not sitting properly on his nose bridge. That’s when I knew he would be perfect in this photoshoot. This is not the first time that I have designed styles to fit nose bridges that are wide and low, but it is the first time that we found the right model to showcase this style.

This is my way of saying Thank You to ALL of You.

On January 29, 2014, we shot the 2014 TC CHARTON photo shoot with a special twist, adding some Texas flair to our upscale Asian look. Alexandra has gotten a flood of requests for new images, and we are excited to share this year’s new campaign images with you, very soon! Here is a breakdown and behind the scenes peek of how the photo shoot went. Yeeehaw!

Since moving her company, family and loyal employees to their new national headquarters in Plano, Texas last November 2013 TC CHARTON has continued to expand product lines and inluence to fans and beautiful unique faces around the world. Owner and designer, Alexandra Peng, decided to infuse this year’s photo shoot with local flavor and charm and to that end, scouted photographers, videographers, crew and location all from the Dallas area to reflect that TC CHARTON’s new home is the Friendly State of Texas.

Models were flown in the day before. Yun and I departed from Los Angeles and headed to Dallas, and I was surprised that we went across to the ocean, for a while after takeoff, apparently planes fly directly into the wind initially and then turn into the air currents, a pilot friend of mine later explained to me. After a few hours, Regis picked Yun, Eldridge and I up from Dallas International, one of the largest airports in the country. 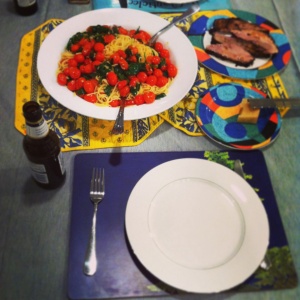 Alexandra, Regis and the girls, and their new rescue puppy, Cocoa, were gracious to host us. Alexandra welcomed us by making an incredible fresh cherry tomatoes and spinach pasta in under 10 mins flat, no problem. With some non-vegetarian options on the side. It was the best tasting thing in the world as we were hungry and tired, then we all tried to get our beauty rest.

The day of the shoot was cold. Outside it was something like 30 degrees. We drove up North through Dallas, until we reached the outskirts of the city and civilization began to fade away as we marveled at the beautiful, raw scenery. The landscape reminded me of California’s Central Valley where I grew up, stunning yet stark and utilitarian with agriculture being the main industry. We reached the ranch and cottage location. 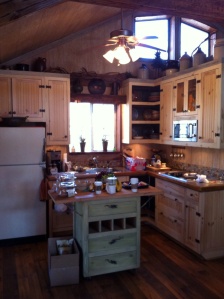 We had brought enough snacks to feed our little army for the day and everyone quickly set up. Our first set was shot in the upstairs of the barn. Our hosts at the ranch were the owners, a great husband and wife team who had built the structures on the ranch by themselves, him putting reclaimed wood together to build the vintage replica barn, the cottage where we staged the shoot, and possibly their own house, with amazing loving care and attention to detail. She had designed the interiors thoughtfully using reclaimed materials, like champagne corks of different kinds for drawer pulls in the Jack-and-Jill bathrooms.

Makeup artist, Leslie, had arrived early to scout out the best lighting in the cottage and did the makeup and hair for all the models in a window corner where the sun filtered in. Alexandra had opted to do lead styling herself, tying all aspects of her vision for the brand together by choosing pieces that reflect the lifestyle and upscale nature of the brand, but also playing on down-to-earth all American staples like jeans wear, tall boots, flannels, white collared shirts, and leather jackets. Bradie meticulously and efficiently coordinated logistics and wardrobe changes and steamed the garments to perfection. 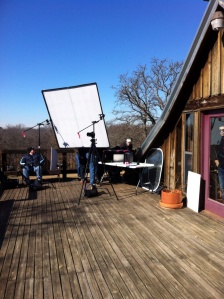 All set up on the barn, lofted area.

The videographer and his crew and photographer, Sergio and his crew, who are all Dallas locals, seemed able to survive outdoors in the cold on the various sets for most of the day, while us models, who are all from sunny California, took turns reheating and defrosting ourselves indoors at the Cottage and outdoors in front of an amazing bonfire that the awesome owners lit up for us with a healthy dose of kerosene. 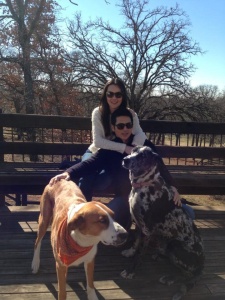 The dogs helped out!

This is my new favorite picture, ever. The dogs belonged to the ranch owners and wandered into the shots with some coaxing, since they were doing the rounds.

Alexandra had chosen Eldridge, a FORD model who hails from San Francisco and was referred by our other model, Charlene, (featured in the counterpart Alexandra Peng collection photo shoot that took place the following Saturday) because Alex had gotten so many inquiries from all around the country, for a Blasian look. I learned that Blasian refers to a mix between Asian and Black American, which is distinct from the identity term, African American. As Alexandra pointed out, Eldridge was making history and creating images that are a sign of our times, as these glasses do fit a variety of faces from all ethnic backgrounds and mixes. 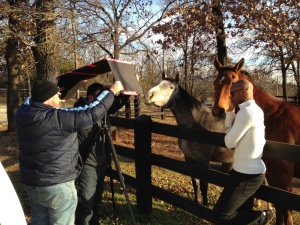 In a hilarious but also awe inspiring moment, Eldridge was helped out by two canny horses, who stepped into the frame on either side of him, while he was posing next to their corral, amazingly the horses held perfectly still and faced the camera. Whoever says animals aren’t aware and sentient beings misses the meaning in moments like these.

Towards the end of the day, we were racing the sunlight, squeezing out as many sets as we could. Luckily, my last wardrobe change and set was inside the cottage, as the temperature simultaneously dropped lower as the sun did. It was a very productive and smooth flowing day, as everyone pitched in and worked together as pros. We celebrated another successful wrap at the Brick House in Dallas, a local sports bar where everyone we met was super cute and friendly!

Thank you all for eagerly awaiting this year’s campaign photos! If you have questions about our products, or would like order, or to be added to the waiting list to be notified as soon as the new campaign images are ready, please email info@TC-Charton.com